The Journal of Exposure Science & Environmental Epidemiology published a critique of a paper on 5G. The report discussed misstatements, misclassifications, and exclusions of important scientific findings regarding 5G wireless radiation health risks.

Karipidis et al. published a scoping review investigating radiofrequency (RF) studies in the range greater than 6 GHz, with a particular focus on the millimetre wave (MMW) band. “The results reveal issues of potential bias as well as questions around the completeness and thoroughness of the work conducted by Karipidis.”

“Examination of the Karipidis 5G health review reveals many errors in classification and analysis. Some are minor, and although indicating a lack of diligence, they have no substantial implications for the outcomes identified in the papers reviewed. Of much greater concern are the number of misstatements, misclassifications, and exclusions of important findings from sound research.”

“This important article reveals the urgent need for a full and frank airing of the science. The wireless industry is following in the footsteps of the tobacco industry. The limits set by the International Commission on Non-Ionizing Radiation Protection (ICNIRP) and the Australian Radiation Protection and Nuclear Safety Agency (ARPANSA) do not protect people of the environment,” stated Dr. Devra Davis, President of the Environmental Health Trust. “The Oceania Radiofrequency Science Advisory Association (ORSAA), whose scientists were among the authors of the review, has a searchable database on peer-reviewed scientific studies and articles on bioeffect research of electromagnetic fields providing an invaluable resource to scientists.” 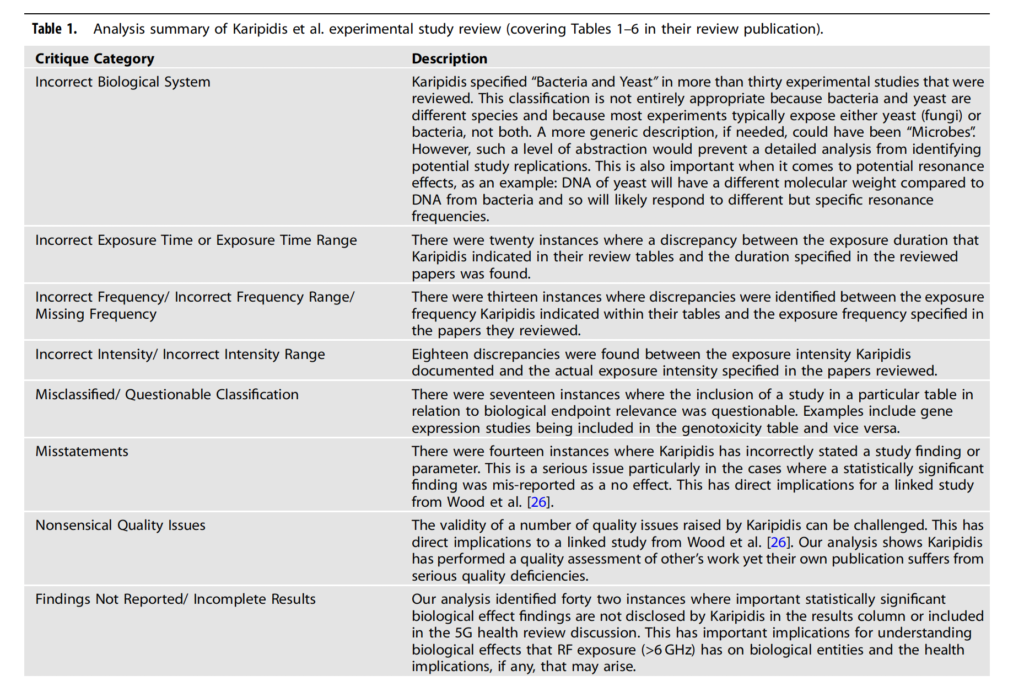 “Other important works have been omitted from the Karipidis review. Epidemiological studies suggest that RF exposures from other technologies such as radar are associated with an increased risk of hemolymphatic cancers [19], and experimental studies investigating genotoxicity in blood cells [20] have found the same. Such converging evidence requires an immediate focused investigation into RF bioeffects rather than dismissal. Other health risks potentially linked to RF exposures include pregnancy complications, fertility impairment, testicular cancer and brain cancer. These are identified in our analysis [13] and will be discussed in a future paper.”

“Other researchers [21] agree that the current peer reviewed science points to “predictable harm to life forms within mixed frequency mesh networks with negative consequences likely over time”. Russell assessed the literature on MMW effects on skin and eyes, the immune system, gene expression, and bacterial antibiotic resistance. Because of the shallow penetration of MMW, the skin and eyes are of significant concern. More than a decade ago, research by Feldman et al. [22] indicated that sweat ducts in the skin could behave as antennas and thus respond to MMW. The same group [23] later stated that there is enough evidence suggesting that helical sweat ducts in conjunction with wavelengths approaching the dimensions of skin layers could lead to non-thermal biological effects.”

“Finally, the Karipidis review lacks representation of many species, including plants, amphibians, birds, domestic animals and most importantly, insects. Therefore, readers are provided with little to no understanding of how MMWs impact these important ecological entities. This is a significant gap.”

Read and download the full article here. Note, the article cites extensive supplementary data that you can download from this webpage.