European Parliament requested a research report  “Health Impact of 5G” which was released in July 2021 and concluded that commonly used RFR frequencies (450 to 6000 MHz) are probably carcinogenic for humans and clearly affect male fertility with possible adverse effects on the development of embryos, fetuses and newborns.

The study “Radiofrequency radiation from nearby mobile phone base stations-a case comparison of one low and one high exposure apartment “ published in Oncology Letters (Koppel et al 2019) found that the apartment with high RF exposure had outdoor areas as close as 6 meters (about 19.6 feet) from the cell antenna array. In contrast, the low exposure apartment’s balcony had cell antennas at 40 meters (about 131 feet) away. The researchers also found that both apartments had good mobile phone reception and “Therefore, installation of base stations to risky places cannot be justified using the good reception requirement argument.”

A 2017 case report of RF levels in an apartment close to two groups of rooftop cellular antennas used an exposimeter to measure levels of different types of RF in the apartment and balconies including TV,  FM, TETRA emergency services, 2G GSM, 3G UMTS, 4G LTE, DECT cordless, Wi-Fi 2.4 GHz and 5 GHz  and WiMAX. The closest transmitting antennas were at a base station 6 meters from the balcony. The researchers documented a number of important findings. First, 97.9% of the mean RF radiation was caused by downlink from the 2G, 3G and 4G base stations. (Downlink means  frequencies emitted “down” from the base station cellular antennas.)  The researchers found that if the base station RF emissions were excluded, the RF radiation in the children’s bedrooms was reduced ~99%. The researchers conclude that, “due to the current high RF radiation, the apartment is not suitable for long‑term living, particularly for children who may be more sensitive than adults.”

A study measuring RF EMF exposure in the European cities of Basel, Ghent and Brussels found total RF exposure levels in all investigated outdoor locations had increased up to 57.1% in one year (April 2011 to March 2012). The RF increase was most notably observed in outdoor locations due to mobile phone base stations. Urbinello et al., 2014

A 2018 study by Hardell et al published in the World Academy of Sciences Journal found the RF levels at Järntorget square in Stockholm Old Town Sweden (measured in April, 2016) were only one order of magnitude lower than the RF levels associated with an increased incidence of tumors in the Ramazzini radiofrequency animal study (Falcioni et al 2018) which exposed rats to a lifetime of RF mimicking cell tower base station exposures.  The authors concluded that, “These results indicate that an increased cancer risk may be the situation for individuals staying at the square, primarily for those working in shops and cafés around the square. We have not measured RF radiation emissions in apartments around the square. It cannot be excluded that at certain places, the radiation may even be higher…”

A 2017 study of Royal Castle, Supreme Court, three major squares and the Swedish Parliament found despite the hidden architecturally camouflaged antennas, the passive exposure to RF radiation from cell antennas can be higher than RF levels associated with non thermal biological effects. Some of the highest levels  were from antennas closer to the ground and targeted towards the square. The researchers note that the heaviest RF load falls on people working or living near hotspots, compared to people that are walking by and briefly exposed. RF measurements from earlier published studies were compared to the 2017 measurements indicating that “it is clear from our present and previous studies that the level of ambient RF radiation exposure is increasing.”

A 2022 study “Very high radiofrequency radiation at Skeppsbron in Stockholm, Sweden from mobile phone base station antennas positioned close to pedestrians’ heads” created an RF heat map of RF measurements finding that the highest RF measurements were  in areas of close proximity to the base station antennas. The researchers concluded with recommendations to reduce close proximity placements such as positioning antennas “as far as possible from the general public”  like in high elevation locations  or remote areas.

A 2022 study in the World Academy of Sciences Journal measured levels of radiofrequency radiation (RFR), from wireless networks including 5G, in the city of Columbia, South Carolina and found the highest RFR levels in areas where the cell phone base station antennas were placed on top of utility poles, street lamps, traffic lights or other posts near to the street. When the scientists compared their 2022 findings to a 2019 published review on the mean outdoor exposure level of European cities, they found the Columbia, South Carolina  measurements to be the highest. The Columbia, S.C. study concluded that the highest exposure areas were due to two reasons:  cell phone base antennas on top of high-rise buildings provide “good cell coverage reaching far away, but creating elevated exposure to the radiofrequency electromagnetic fields at the immediate vicinity; and cell phone base station antennas installed on top of utility poles have placed the radiation source closer to humans walking on street level.” 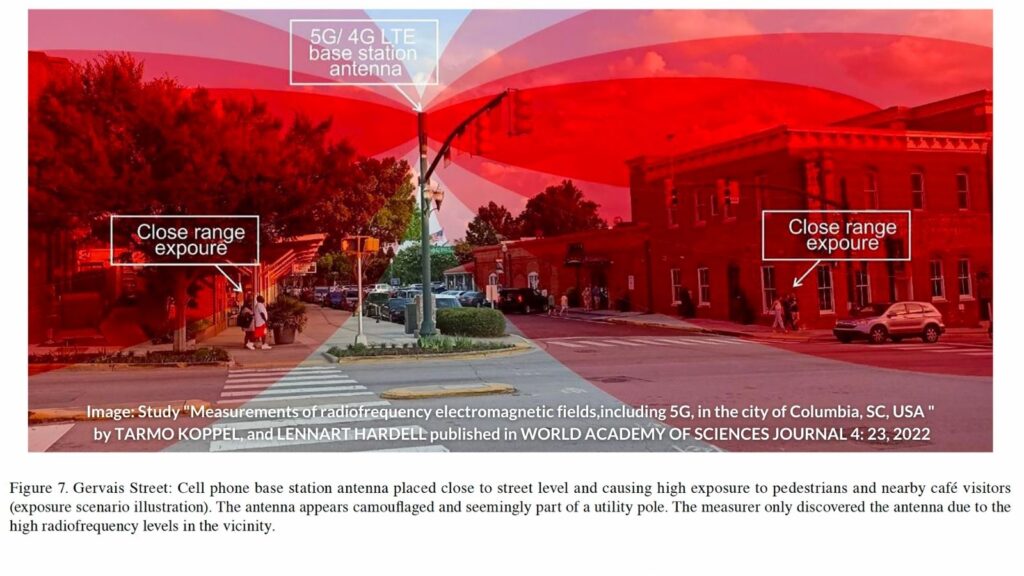 In 2011, radiofrequency radiation was classified as a Class 2B possible carcinogen by the World Health Organization’s International Agency for Research on Cancer (WHO/IARC). The WHO/IARC scientists clarified that this determination was for RFR from any source be it cell phones,  wireless devices or cell towers. Since 2011, the published peer-reviewed scientific evidence associating RFR to cancer and other adverse effects has significantly increased.

In 2019, the WHO/IARC advisory committee recommended that radiofrequency radiation be re-evaluated as a “high” priority in light of the new research. The date of the re-evaluation has not been set.