Prominent medical doctors and scientists have sent a letter to the CEO of Girls Scouts of the USA requesting they stop issuing the 5G Patch that was developed by a telecommunications company Ericsson stating that is sends a “dangerous message” to girls because of te inaccurate safety claims regarding 5G technology.

Download the Doctors and Experts letter to Girl Scouts on 5G Patch here.

We applaud and support the Girl Scouts in their efforts to support STEM education for girls.  However, it is also critically important that Scouts are educated about how to minimize health risks of technology, and are provided with science based information.

Please immediately suspend Girl Scouts of America’s 5G and IOT Ericsson patch because it disseminates scientifically inaccurate information and promotes a false and dangerous message.  The activities for this badge are based entirely on materials developed by Ericsson (the Swedish multinational telecommunications firm), and they misleadingly state that 5G networks and phones are safe.  In fact, scientific evidence clearly indicates that 5G and wireless networks are not safe.

5G will include low and mid band wireless frequencies that research links to memory damage, headaches, oxidative stress and impacts to the brain, endocrine system and reproduction as well as brain, thyroid and breast cancer.

As experts in the health impacts of digital communications technology, and as several of us are former Girl Scouts and parents of Scouts, we ask that an independent expert group be convened to develop a safer technology patch that reflects the up to date scientific evidence and medical recommendations.

Most parents are aware that excessive use of screens is contributing to depression, inactivity, bullying and many other mental health issues in children.  However, most are unaware that wireless devices emit invisible microwave radiofrequency (RF) radiation, an exposure which presents serious health risks according to numerous scientists.

In addition,  buried in the manual of cell phones are manufacturer instructions to keep the phone 5mm or further from the body. Research shows that if the phones are in body contact, the radiation exposure can exceed government limits. That information, and so much more, is what Girl Scouts need to know.

The American Academy of Pediatrics states that children are “uniquely vulnerable” to RF radiation and has repeatedly called for an update to U.S. regulations because research finds children absorb up to 10 times more RF radiation into their brain, eyes and bone marrow.  Most importantly, as the brains of children and teens are still developing, they remain far more sensitive to harmful effects.

One activity for the 5G Badge has the Scout explaining to an adult “how millimeter wave spectrum is safe and does not cause harm to our health.”  This is simply not factual.  No U.S. health agency has ever made such a safety determination for these frequencies, nor has any agency reviewed the totality of the science to develop health based safety standards for millimeter waves or wireless radiation.  Most of the 5G patch activities link to Ericsson content and Facebook and Youtube videos and other advertisements.

The European Parliament’s research report “Health Impact of 5G” concluded that commonly used wireless frequencies (450 to 6000 MHz) are probably carcinogenic for humans and  affect male fertility with possible adverse effects on the development of embryos, fetuses and newborns.  No determination was made on 5G’s higher millimeter wave frequencies because there was an absence of adequate safety data regarding long term effects.

Current U.S. laws on allowable human exposures to wireless RF remain unchanged since 1996.  In fact, the U.S. FCC’s cell phone RF limits are based on a 220 pound man, not a young girl, and they do not consider long-term effects from years of exposure that will affect our girls.

Until U.S. regulations catch up with the science, the Girl Scouts can take a leadership role in supporting girls’ health and safety.

We recommend that the Girl Scouts develop a “Safer Technology” patch that includes ways to be tech savvy in the twenty-first century.  Similar to the Girl Scout’ Screen Smart patch that educates girls about the overuse of screens, the new patch could teach girls how to minimize wireless radiation exposures, and how to choose,use, and design safer, non-wireless technologies for a healthy future. Activities could include addressing the environmental (impacts to pollinators, wildlife, trees) and life cycle impacts (e-waste, energy consumption, human rights issues) of unfettered 5G deployment.

Instead of relying on a corporation to provide safety materials on the radiation emissions of their own products, we recommend the Girl Scouts employ health information developed by independent medical and public health experts, for example:

“Avoid carrying your phone against the body like in a pocket, sock, or bra. Cell phone manufacturers can’t guarantee that the amount of radiation you’re absorbing will be at a safe level.”

“If you plan to watch a movie on your device, download it first, then switch to airplane mode while you watch in order to avoid unnecessary radiation exposure.”

“Don’t sleep with your phone in your bed or near your head.” CDPH Advisory

We offer our expertise to support the development of a Safe Tech Patch and  thank you so much for considering this important children’s health issue.

The Environment and Cancer Research Foundation

Director, Institute for Health and the Environment

Professor Emeritus, Dalla Lana School of Public Health, Univ. of Toronto. Senior Epidemiologist for the International Agency for Research on Cancer, formerly Director of the Epidemiology Unit of the National Cancer Institute of Canada, Chair of the Department of Preventive Medicine & Biostatistics at Univ. of Toronto

Download the Doctors and Experts letter to Girl Scouts on 5G Patch here. 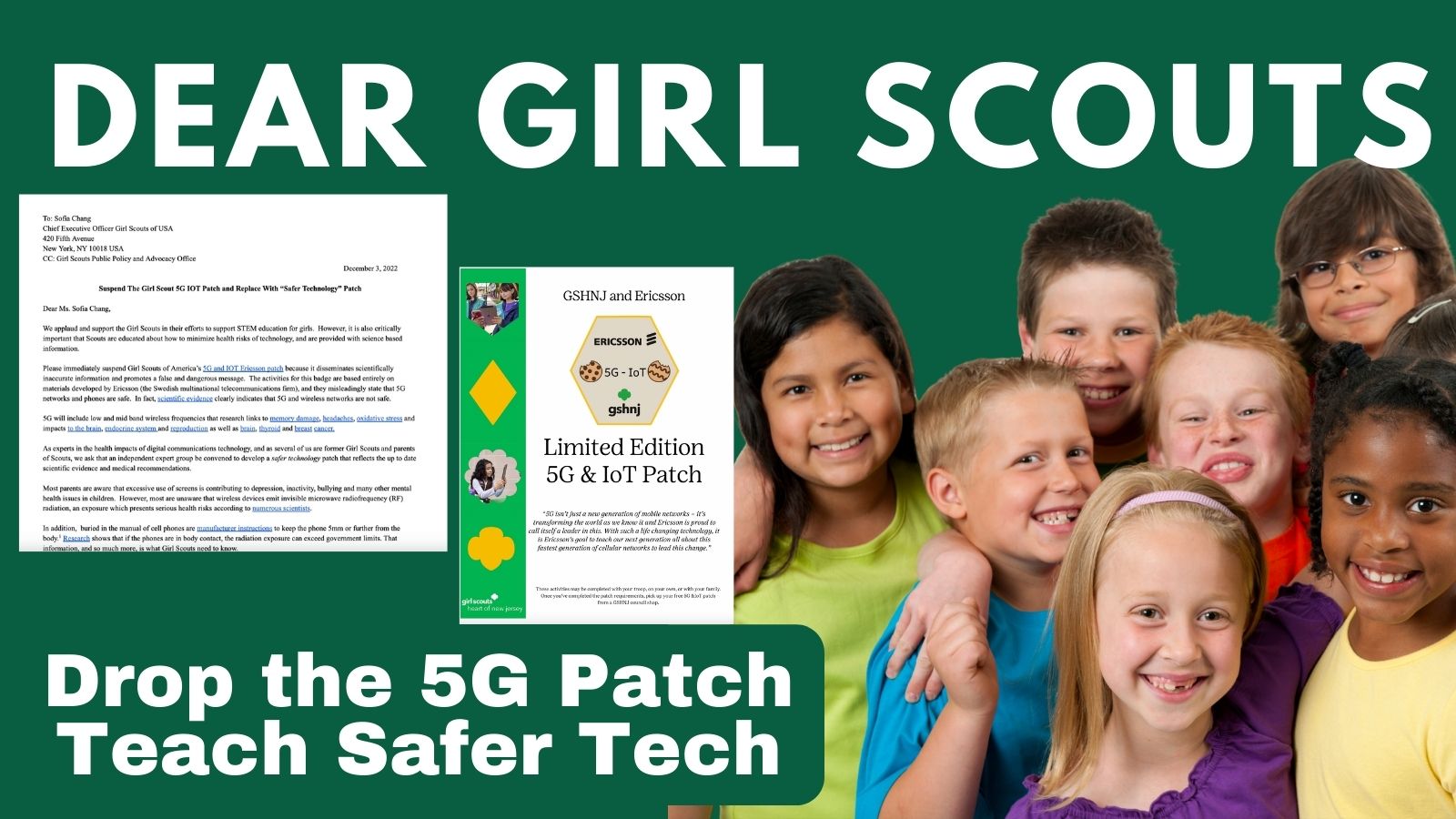