A joint study by CU Medicine and the Association of Pacific Rim Universities (APRU) found that the global incidence of primary brain cancer was higher in high-income jurisdictions, and was closely related to the per capita gross domestic product, the human development index and the prevalence of traumatic brain injuries, occupational carcinogen exposure and mobile phone use at the country level. 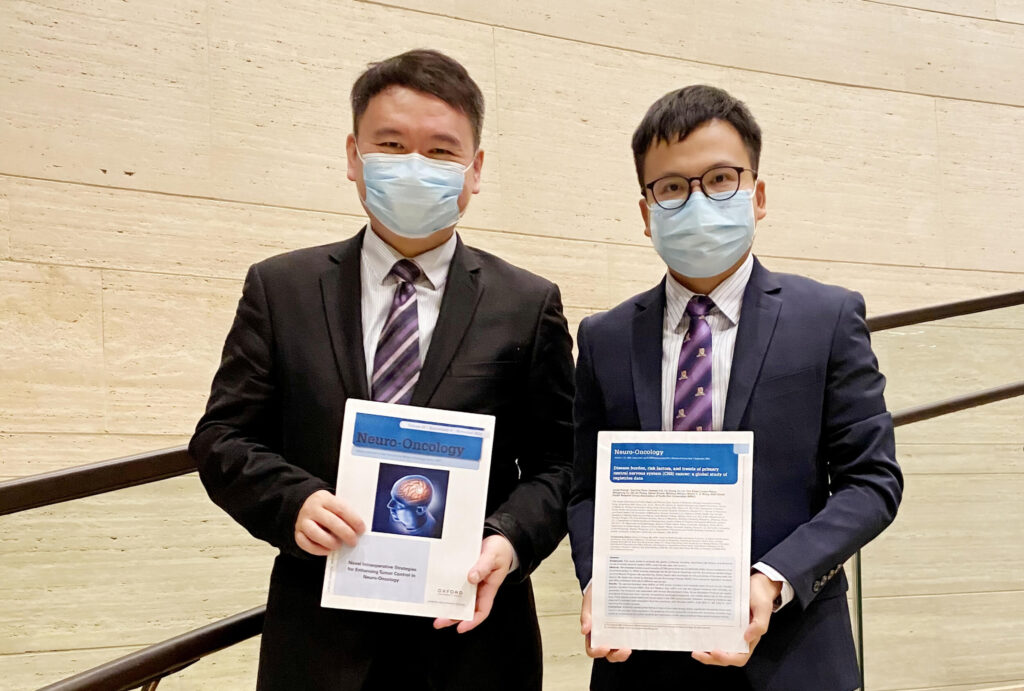 Primary brain cancer1, though not a common malignancy, has a very poor survival rate compared to other types of cancer; medical researchers are therefore keen to explore novel treatments and increase their knowledge of this rare but lethal disease. The Chinese University of Hong Kong (CUHK)’s Faculty of Medicine (CU Medicine) has conducted a study with the Association of Pacific Rim Universities (APRU) to investigate the global distribution and risk factors of and epidemiological trends in primary brain cancer. The results showed that the incidence of primary brain cancer was higher in high-income jurisdictions, and was closely related to the per capita gross domestic product (GDP), the human development index (HDI) and the prevalence of traumatic brain injuries, occupational carcinogen exposure and mobile phone use at the country level.

Global incidences of primary brain cancer have been relatively stable over recent years, but an increase was observed in younger males in high-income countries. Researchers recommended that risk factor control and early cancer detection should be implemented among high-risk populations. Details of the study have been published recently in the international medical journal Neuro-Oncology.

The causes of primary brain cancer remain unknown, with a higher incidence in high-income countries

Primary brain cancer is a malignant tumour that originates from the tissues of the brain. The most common type is glioma, which forms when glial cells grow uncontrollably. According to Hong Kong’s Hospital Authority, there were 240 new cases of and 115 deaths from primary brain cancer on average annually in the city over the past decade (2011-2020).

To understand the most up-to-date geographical distribution and identify the population groups at high risk of primary brain cancer, the research team retrieved data on the age-adjusted incidence, mortality and prevalence of different risk factors from international databases such as the Global Cancer Observatory, WHO Mortality Database and WHO Global Health Observatory data repository.

Global primary brain cancer incidence is stable, but the rate in younger males is on the rise

Primary brain cancer incidence has been stable globally over the past decade, yet an increasing trend was found in younger males in developed economies. Using the Average Annual Percentage Change (AAPC)2 for comparison, the largest increase in incidence rate among males was found in Slovakia (4.4). Among females, the largest increase was found in Denmark (3.4). Notably, a relatively larger increase was found in males aged 50 years and younger, which was most pronounced in Slovakia again (see details in Table 2 in appendix). Similarly, the trend in mortality from primary brain cancer has been stable rather than showing an obvious decreasing trend.

Dr Jason Huang Junjie, first author of the study and Research Assistant Professor from The Jockey Club School of Public Health and Primary Care at CU Medicine, said, “The incidence of and mortality from primary brain cancer vary by region, which may be related to detection and diagnosis ability and the prevalence of risk factors in each place. However, the causes have not been established yet and require further investigation. Future studies should explore the reasons behind these epidemiological transitions, so that they can provide insights on causes and prevention.”

Professor Martin Wong Chi-sang, the senior corresponding author of the study, from The Jockey Club School of Public Health and Primary Care at CU Medicine, added, “The overall incidence of primary brain cancer has been stable in recent years, but it is alarming that it is increasing among younger males and its mortality has not obviously declined. Policymakers in different regions should implement evidence-based, targeted prevention strategies to control relevant risk factors. Our study provides the most up-to-date evidence on the global distribution and risk factors of and trends in primary brain cancer.”

This study is a collaboration with Professor Mellissa Withers, the Director of the APRU Global Health Programme, Keck School of Medicine, University of Southern California. APRU was established in Los Angeles in 1997 by the presidents of UCLA, Berkeley, Caltech and the University of Southern California. It now has a membership of 60 leading research universities from around the Pacific Rim. CUHK is an important member of the APRU, and Professor Martin Wong Chi-sang and Dr Jason Huang Junjie are currently the Co-Chairs of the network’s Non-Communicable Diseases (NCD) Global Health Working Group.

2 AAPC is a measure of the overall changes in cancer incidence or mortality during a specific period. For example, if the incidence AAPC of a certain cancer in a country is five for the past 10 years, it means that the incidence in that country increased by 5% on average each year over the 10-year period.